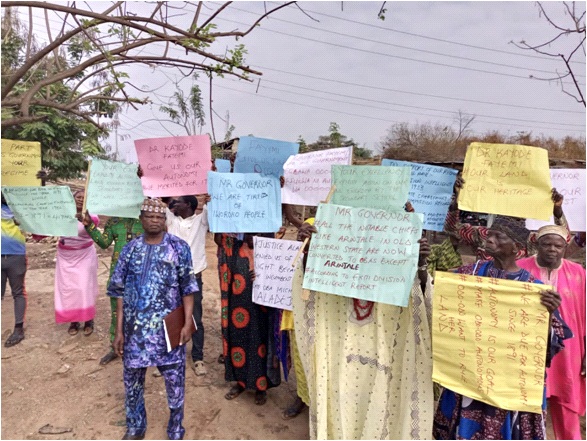 The people of Odo-Odo, a section of Iworoko Ekiti in Irepodun /Ifelodun local government area of Ekiti State have protested against relegation of their monarch “Arinjale” title to a mere chieftaincy status.

The people of the community in their hundreds trooped out carrying placard protesting the relegation of the full-fledged monarch and denial of autonomy for the town by the Ekiti State Government.

The indigenes, who are descendants of Ewi of Ado Ekiti, maintained that  failure to grant them autonomy by successive governments, despite being the first settlers, had caused a setback in terms of development, recognition and savouring of dividends of democracy.

The spokesperson of the placard-carrying protesters, Prince Julius Babalola, described the protest as a peaceful one aimed towards demanding autonomy for Arinjale of Odo-Odo and the entire community.

Babalola posited that the Intelligence Report of 1933, Ondo State Chieftaincy Review Commission of 1978 and a book written by Ewi of Ado Ekiti, Oba Rufus Adeyemo Adejugbe, rated Arinjale as a full-fledged monarch, wondering why the title was being relegated by government.

The Septuagenarian regretted how the town was politically manipulated out of recognition and denied of autonomy by Justices Silas Oyewole and Jide Aladejana-led Chieftaincy Review Commissions of 2014 and 2020 respectively.

“Our progenitor, Gberubioya, a prince  from Ado Ekiti came to this place in 1891 with his crown and people . We didn’t meet anybody here. Alaworoko came from Ila Orangun in Osun State to join us 41 years after.

“We already had a full fledged royal dynasty before he joined us. But we are not enjoying recognition and development, because we are not given autonomy. How can we be treated this way in a land we founded and suffered for?

“The Chieftaincy Intelligence Report of 1933 said on page 22 that there are two political heads in Iworoko : The Alaworoko and Arinjale and that they are of the same class and strength.

“How can we now be put under Alaworoko when it was clear that we have our own Oba but not recognised? This is injustice and Governor Kayode Fayemi must correct this. We merit it going by history and tradition”.

Babalola stressed further that during the proceedings of the Ondo State Chieftaincy review commission of 1978, that the then Alaworoko did openly confess before panelists that there are two broad sections in Iworoko, but pleaded that he wanted the town to remain united instead of being divided.

“Despite these avalanche of evidence of our established monarchy here, the Justices Silas Oyewole and Jide Aladejana- led review commissions of 2014, and 2020 said the Memoranda we submitted to grant us autonomy lacked merit.

“Autonomy is part of democracy dividends. We have always been supporting the APC government and we have a rich history supporting our case, so we appeal to Governor Fayemi to grant our request before bowing out on October 15,2022”.

Babalola also appealed to Fayemi to stop the management of Iworoko Community secondary school from further encroaching on their lands given to the institution in 1975 for the establishment of the school, saying  about 29.9 hectares of lands had been forcefully hijacked from them.