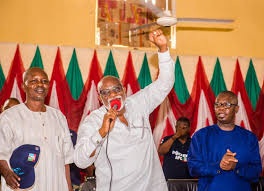 By Babatunde Olorunleke
|
A political group in Ondo state under the name, G10 has declared its support and commitment towards the re-election bid of Governor Oluwarotimi Akeredolu.

The G10 which comprises immediate past caretaker chairmen across the 18 local government areas of the state made the declaration at the flag-off of campaign and erection of billboards for re-election of Governor Akeredolu at the Akure Airport.

The chairman of G10 and former Caretaker Chairman of Owo local government, Mr. Gani Omaluka  said the Governor has done well in the state, noting that before the advent of the current administration, the whole state was in comatose.

Omaluka appreciated the governor for the opportunity given them to serve, noting that they were the first appointees of the governor.

He listed the achievements of the Governor to include prompt payment of salary, roads construction and many more, describing the feat as an impeccable record less than three years in office, hence, the reason he deserves a second term.

Speaking at the event, Ondo state First Lady, Arabinrin Betty Anyanwu-Akeredolu who was represented by Special Assistant to the Governor on Gender Research and Documentation, Mrs. Temitope Daniyan, lauded the group for the move, saying that this is the first flag off for the re-election of Mr. Governor.

She called on the people of the state to support the re-election  noting that Akeredolu is a man of integrity, truthful in all areas and a good leader.

Also, the Special Adviser to the governor on Political Matter, Mr. Tunji Fabiyi said the G10 has rewarded the effort of Mr. Governor by galvanizing the people and mobilize the support of their people for his second term.

He said the achievement of Akeredolu propelled them as former chairmen to commit themselves to his re-election.

The former caretaker chairman of Akure North Local Government and Secretary of the group, Prince Segun Oluyede said they felt  it is expedient to politically declare their support for the governor’s re-election, adding that Governor Akeredolu has performed excellently, and that they need to encourage him by flagging off his re-election campaign.

He said they are notable politicians in their various Local governments, and they have programme to mobilize the masses at the ward and LG levels in support of Mr. Governor which we intend to implement as time goes on.

The immediate past chairperson of Akure south local government and the treasurer of the group, Comrade Atere Margaret said: ” We are doing this for Aketi in appreciation of what he has done for us, we are the first generation being employed by him, and we are grateful.

Also speaking at the event, the past Caretaker Chairman of Ilaje local government, Comrade Fayowole Ayanfe said that G10 are people who have being together for long in the political matter of the state.