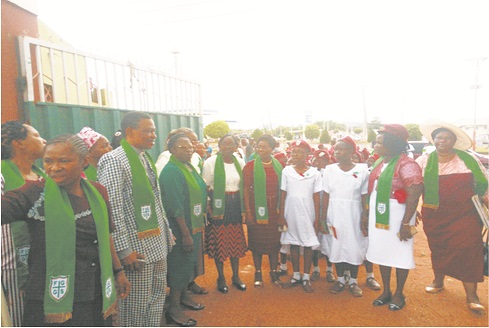 By Bukola Olamona
|
In a colourful ceremony, the newly admitted students of Fiwasaye Girls’ Grammar School into Junior Secondary School 1 (JSS1), have been ushered in officially into the school premises.

According to the School Principal, Mrs Taye Bola, she said  702 students have  unofficially commenced  class works but were ” walked in” officially so as to know the rules and regulations of the school.

Taye Bola said the ceremony is an annual event   designed to usher  in the new students into their new environment and classes.

She said part  of the activities lined up for the ceremony is that a Lawyer will administer an oath of allegiance to the students, an enlightenment programme and other social activities to make it memorable.

Taye Bola  said the ceremony became pertinent for the students  as they might want to take some things for granted, hence the need for them to know the rules and regulations of the school.

She advised the students to be ready to learn so as to  keep their studentship in the school and also be law abiding..

Earlier, teachers from the Counseling Department led by Mrs Mojisola Jemilugba did the official handing over of the students to the school principal.