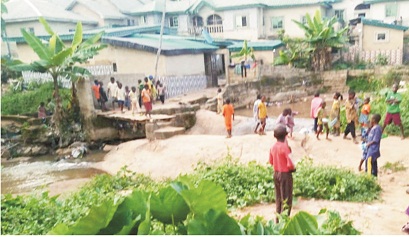 From Jimoh Ahmed, Ikare Akoko
|
Barely a week to the expiration of the one month evacuation notice given to owners and residents of the buildings along the canal where a 400 level student of the Adekunke Ajasin University, Akungba Akoko, Doyin Boluwaji was swept away by flood,  to vacate their buildings,  the order is yet to be complied with, The Hope investigation has revealed.

When our reporter visited the area yesterday, only few houses which were damaged by the flood had no inhabitants.

The state government had given the order through the Commissioner for Urban and Physical Planning, Alhaji Rasheed Badmus to owners of the buildings along the canal to vacate them to pave way for their  demolition.

The Alale of Akungba, Oba, Isaac Sunday Adeyeye Ajimo III had equally  thrown his  weight behind the decision of the state Government on the demolition of the  illegal  structures in the town during an inspection tour by the Commissioner.

The monarch confirmed that he had held series of meetings with the people to intimate them on the state government’s position against erecting structures without approval.

However, six days to the expiration of the notice, owners of such marked buildings and inhabitants were yet to do so.

When our reporter visited the area yesterday, inhabitants were seen carrying out their normal daily activities.

Effort to speak with them was rebuffed as they refused to speak on the issue, claiming that they could not speak on such sensitive matter.

However, an occupant of one of the buildings who spoke under the condition of anonymity said they have nowhere else to go as there is no alternative place to keep their belongings.

He said that with the high price of building materials and plots of land in the town, it will be a day dream to immediately own another house.

According to him, getting a house to rent in Akungba was a difficult task as the few ones available for rent are too costly because of the students population.

He posited that the people were willing to comply with the directive but found it difficult to do so because of the non availability of alternative places to lay their heads.

He therefore called on government to provide an alternative accommodation and financial assistance for those affected by the directive.

Alternatively, he called on government to extend the ultimatum so as to give the people more time to seek other means.

A student of Adekunle Ajasin University who still resides in one of the marked buildings, Faith Adeleke said she was desirous of relocating from the area, but  financially handicapped as she is self sponsored.

Faith who said she rented a house in the area when all her effort to get accommodation somewhere else was not successful.

She stated that she was aware of the dangers of living in such area but could not afford another rent  now.

She disclosed that her plan was to get accommodation in a safer area of the town next semester.

Another resident, Mrs Florence Akindele who claimed that her husband built one of the houses told our reporter that she has been using the proceeds from the house rent to cater for herself and her children.

Mrs Florence who said her husband died five years ago said with her meagre resources she could not vacate the house.

When our reporter pressed it on her that flood could sweep away the building and may even lead to death, she said she was willing to comply with the government order but she has no means to do so.

She therefore called on government to come to their aid either by way of compensation or provide alternative accommodation for them.

Speaking with our reporter on the same issue, a resident, Mr Sunday Michael said government has done well in wanting to demolish the houses.

Sunday, whose house is far from the canal said that those that built houses close to the canal were warned against doing so when they were putting up the structures.

He said the people were money conscious and never thought of the consequences before they built the houses.

He therefore called on government not to rescind the decision to demolish the marked houses.

Meanwhile, the chairman of Akoko Southwest Local Government, Mr. Dapo Faseesin said government would not look back on the demolition order.

Faseesin said he was aware that the house owners have not complied with the directive to vacate the marked buildings but said nothing is stopping it from carrying out the exercise.

The local government chairman in the area, Dr Dapo Faseesin confirmed that the affected landlords and tenants have been given notice to vacate.

The council boss said when the ultimatum expires government will move to the area to Carry out the demolition exercise.

According to him, most of the people living in the area are students and the government of Arakunrin Oluwarotimi Akeredoku valued lives of the students greatly and could not afford to play with it.

He disclosed that government is aware of the plight of the students in securing accommodation and so every arrangement is being made to provide alternative accommodation even at cheaper rates than what most hostel proprietors charge.

Faasesin who said there are laws guiding the building of houses along streams, said the standard measure is to give a setback of 30 metres to such streams.

He disclosed that this was raised during the era of the late Pa Adebayo Adefarati but people turned deaf ears to it.

According to him most of the houses along the canal have no approved building plans.

He however said the state governor, Arakunrin Akeredolu has the prerogatives of mercy and so he is the only one that can say anything about the demand for compensation.

He has therefore advised those affected by the demolition order to comply with government directive in order not to face the wrath of the law.