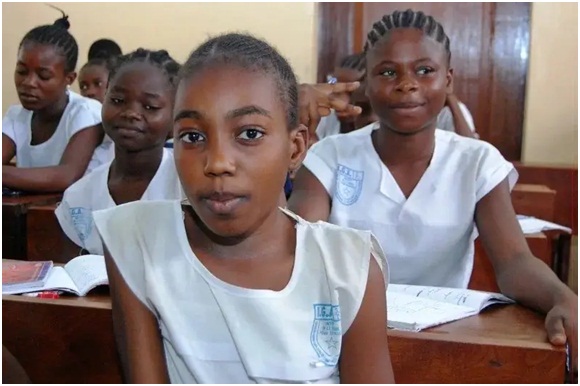 According to research, educated women have a greater chance of escaping poverty, living healthier and more productive lives, raising the standard of living of their children, families and communities.
To this end, education, and most recently the girl-child is becoming a major part of discourse in academic and political spheres in Nigeria. Nollywood producers, radio presenters, academicians, politicians among others are always bringing up the issue to the public attention.
People everywhere, mostly women are watching the debate with keen interest wondering if there will ever be a time when the girl child will be as privileged as the boy child is with regards to the freedom to pursue their academic aspirations.
Honestly, the answers to these questions are best kept inside because while some get excited at the idea of a compulsory education for the Nigerian girl child irrespective of tribe or religion, some people still frown at the idea.
The Nigerian constitution clearly stipulates that every child, boy or girl has the right to education. Actually, the constitution even requires a free and compulsory education for children between the ages of 6 to 15 years.
Nonetheless, we are aware that there are over 10 million children that are not in school and are not receiving any form of training to help them better their lots in life. Of these 10 million children, the woman or more accurately, the girl child- constitutes a greater percentage .
One of the major reasons militating against the girl child education is poverty, followed closely by the culture of the Nigerian people and certain aspects of the Nigerian religion. With about 60% of Nigerians living in poverty, families are forced to make very difficult choices. One of such choices is to sacrifice the education of some of its children for the education of one who will later carry the other family members to ‘the promised land.
Investigations shows that the education of the girl child is mostly sacrificed for that of the boy child.
This practice undermines the roles a woman plays in the family and the society at large. Woman is the foundation of the home. She could make it work or just break it. To the child, she is a friend, a teacher, a confidant, a counselor and the hand that feed.
To this end, The Hope reporter went round the town to examine the views of some people on the issue.
According to a civil servant Mrs Foluke Fadayomi, , girl child education is very important in any nation that want to grow in all aspects of her endeavours. The popular saying that when you educate a girl, you have educated ,trained the whole family /nation could not be ignored because the reason for the adage emanated from the thought that girls roles are very pivotal in the society.
She also said “When a girl is educated, everything seems to be well with the family that raised such child, as the multipliers effect could not be qualified.”
To her, since a girl is the closest to the home, a good upbringing of the child would translate to a conducive environment ,because of the impact the girl -child has on the family generally.
She maintained that it will be a disservice to leave the girl out of formal education simply because she is a female child.
She also said “when the education of a girl- child is neglected, such girl becomes problematic to her parents and the nation at large.
To this end, she advised parents and guardians to educate the girls in order to have a more stable, dependable and better society.
Also speaking is a Public Affair Analyst, Mrs kehinde Ojo who opined that girl education is very important in many dimensions, including upbringing of the children and up keeping of the home.
She noted that “When you educate a girl, you have educated a nation.”
She explained that girl -child education helps in all aspect of human endeavours, adding that the girl is the home builders and helper in the family hence the need to take their education as priority.
To her, educating the girl will make the society a better place to live “Where we have women as a leader, they often perform better than men, how, will they perform without been educate.”
“Women are soft hearted, God fearing, and also considerate, before taking any decision, they always consider how it can affect people within their environment.
“When you educate the girl, they will become very responsible leaders and the nation will be better for it.
An Educationist, Mrs Aina ogunsakin submitted that all girls should be educated because they are still going to become a mother who are playing a major roles in building and moulding the foundation of their children.
She said in her words that any woman who want to be respected ,especially by her husband should have something to offer, noting that a woman who do not have anything to offer does not deserve respect from her husband.
Commenting, a business woman Mrs margret Paul who described women as the light of the family , said every successful man has a woman who is behind him.
To her, what a man can do a woman can also do better, adding that women has more roles to play in the family than men while every man values their wife especially if they are well educated.

Are you a gossiper?

What ladies need to know about their bodies