Land Use Charge: ‘Government  not placing burden on people’ 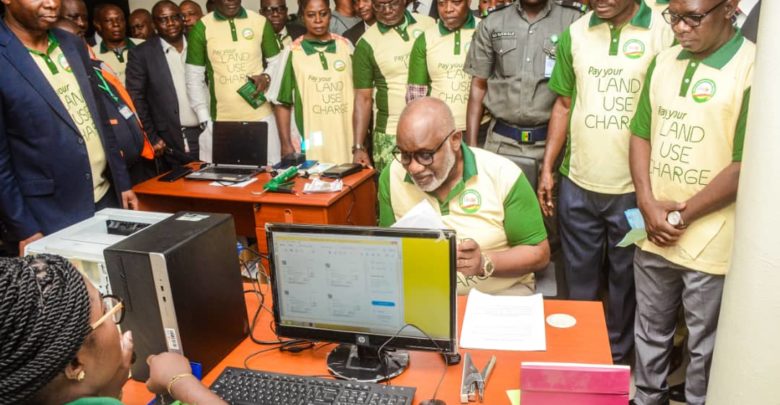 By Chris Chimezie
|
The Ondo State  Governor,  Arakunrin Oluwarotimi  Akeredolu  SAN, has  affirmed that  his administration did not  intend to use the Land  Use Charge to put  burden on the people  of the  state.

Akeredolu  made the   clarification while   making his payment  during  the official  launching of the Land Use Charge payment  held at the office of the Board of Internal Revenue (BIR), Oyemekun Model  Tax Station in Akure, the  state capital.

The  Governor  averred that it is important  that the state government   makes  this  assertion clear to the  good people of the state  as government  is  implementing and  executing  a law that has been in place since 2014  ever  before it came into office.

Akeredolu therefore  solicited the cooperation of  house owners in the state  stressing that the  development  would  have a  salutary  impact  as it would increase the revenue of the state and also assist  in addressing the  infrastructural  deficit.

“We  are looking at  revenue  generation,  building  infrastructure and putting in place proper planning and we need  your  cooperation  and  understanding to do  more for your  well-being”,  he said.

“The law is so specific that everybody needs to pay arrears from 2014. The day the law was promulgated and passed by the state House of Assembly, everybody becomes liable to pay from 2014.

“We are not here to put burden on our people, but when a law has been put in place, as a government, we must be courageous enough to implement it.

“My house, that of the Deputy Governor, Chief of Staff to the Governor and other members of the state Executive Council have  been captured”,  he said.

Governor Akeredolu commended the Board of Internal Revenue (BIR) on the methodology adopted in meeting with stakeholders, Surveyors, Estate Valuers and members of the landlord associations which he said, has brought about a peaceful resolution of various knotty issues.

The Governor, who thanked the people of the state for their understanding and cooperation so far, called on them to pay the little amount that are charged on their properties, adding that the payment would be done annually.

Earlier, Commissioner for Lands and Housing, Mr Donald Ojogo lauded Governor Akeredolu for the gesture noting that apart from revenue generation, it would enhance proper planning for developmental purposes.

He added that the expected land reform would not be only  about allocation of land for land users, but  also involves how land  use  policies are implemented.

“What have been done is taking over 30% of the burden of the Ministry of Lands and Housing in terms of planning and policy formation”, he said.

On his own, Commissioner for Finance, Mr Wale Akinterinwa applauded  Akeredolu for championing the process of implementing the all-important Land Use Charge in the state.

Also, Chairman of Ondo State Board of Internal Revenue (BIR), Mr Tolu Adegbie noted that the Land Use Charge Law would serve as an avenue to increase  the revenue of the state, hence the need to implement it.

To make the dream a realistic one, he hinted that the Board had an extensive consultation with all stakeholders  including various landlord associations, and Nigeria Association of Estate Surveyors who did valuation of all the properties.

While thanking Governor Akeredolu for providing the Board with the necessary supports to achieve success, he added that the various landlord associations have expressed  happiness  for the cancelation of charges for the years of 2014, 2015 and 2016.

He explained that the Land Use Charge was a fusion of all collection rights of several relevant tax authorities which has made it easier for the people to access.

Some of its advantages, according to him, included affording land owners the opportunity to know where they have their properties, serves as one of the evidences to provide, should there be any litigation.