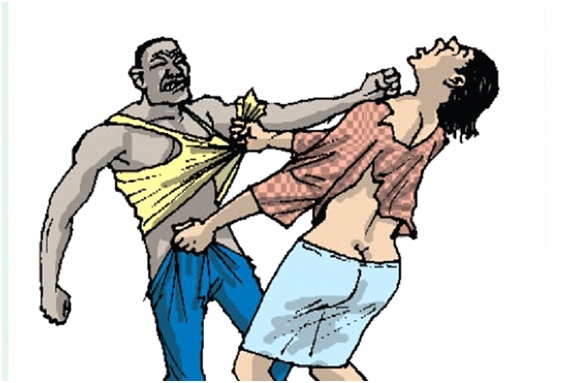 ..he beat her to death – Family insists

A young man in his early  thirties, Oluwaseun  Olabode has lost his freedom as he was docked for the murder of his pregnant wife before an Akure High Court.

Although he claimed that he never fought with his wife, the family of the deceased insisted in their petition and testimonies before the court that she had suffered abuse from her husband several times which eventually led to her death.

According to the prosecution led by H.M Falowo Esq, a Chief Legal Officer, the accused person on April 3, 2020 at 7:00pm in Oke-Ogba Estate, Akure did beat Adaeze Olabode, his wife with a blunt object on the right side of her abdomen while she was heavily pregnant, which subsequently led to her death on April 14, 2020.

The murder was reported on May 5, 2020 through a petition written to the Commissioner for Police  Ondo State Command by one Dr. Henry Orumen esq on behalf of the family of the deceased, Mrs Blessing Adaeze Olabode against Oluwaseun Olabode.

In his testimony, the father of late Blessing Adaeze Olabode nee Anya disclosed that his deceased daughter suffered violent maltreatments from her husband, Olabode Oluwaseun, the defendant and the mother-in-law, Stella Olabode.

He testified further that at a point in their marriage, the deceased attempted suicide and left a suicide note but he waded into the matter and brokered peace between the couple.

He stressed that their entire family were aware of the maltreatment.

“After my daughter’s death on April 14, 2020, her corpse was abandoned at Federal Medical Center (FMC) Owo, until the intervention of my immediate younger brother.” He stated.

The late wife’s mother told the court that her daughter’s husband, Olabode Oluwaseun (Defendant) informed her via a phone call that her daughter was sick while the phone was placed at the deceased’s ear but she could not hear her.

She said that the defendant told her he was rushing the deceased to hospital.

The next morning, she narrated that she met her daughter at Mother and Child Hospital, a caesarian operation had been performed on her, but she did not see the corpse of the baby that died in her womb, which necessitated the operation.

“My daughter informed me that it was her husband who hit her on that particular spot, which led to bleeding and eventual loss of the baby,”she concluded.

Another prosecution Witness, Chief Mrs Folake Sarumi stated that two months prior to the incident  the deceased came to her  house with her first son to solicit assistance In securing a transfer from Owo to Akure In order to join her husband, the defendant and to stop her mother-In-Iaw from intruding into their marital affairs.

Sarumi said that the deceased informed her of various Instances when she suffered domestic violence from the defendant; that he forcefully took possession of her ATM card, though they operate a joint bank account, and that her mother-In-Iaw had always said the defendant made a mistake by getting married to her.

On April 3, 2020, she testified that she received a phone call from the defendant  who informed her that the deceased had given birth but the child did not survive.

About a week after, she said that she got the information that she was dead.

One Abel Akinluyi also testified that as a result of the maltreatment of the deceased by the husband, he was mandated to visit them and broker peace two years ago.

He stated that when the deceased was hospitalized, he went to the hospital and heard people saying that the husband of the deceased did not do well by beating a pregnant woman.

He explained that from what he gathered at the hospital, she was beaten by her husband when they had minor argument over how he used the money she asked him to withdraw for purchase of food and other domestic items during COVID-19 pandemic.

He stated that he was informed by the mother of the deceased, Oladipupo Comfort that the deceased told her that the defendant hit her on the right side of the abdomen during an argument on the issue of how he spent the money she asked him to withdraw on her behalf.

He said that he was also informed by one Pastor Ajibade that on several occasions he had received phone caIIs from the deceased asking him to help pacify her husband whenever they quarrel.

Another witness, one 0.E Pelemo, a Consultant Pathologist stated that he performed an autopsy on the corpse of Adaeze Blesslng Olabode.

He testified that he noticed irregular bruises and abrasions on the right side of the lower part of the deceased’s abdomen, and found the cause of death to be from a wound caused by a blunt force trauma to the abdomen which resulted into internal wound and bleeding.

He said he was one that he prepared the autopsy report and signed it.

Insp. Adaran Adebayo of state CID, Akure testified that a case of murder was reported through a written petition to the office of the Commissioner of Ponce, 0ndo State Command.

He said that he led the team that investigated the case and that the statement of the complainant and their witnesses were freely recorded while the defendant was invited and his statement was obtained after administering cautionary words.

He stated that the investigation  revealed that the deceased and the defendant got married in 2014, she was pregnant with their second child, which was found dead in her womb few days before her demise.

He disclosed that the defendant was known to inflict physical violence on his late wife.

He further testified that prior to her death, they had a quarrel concerning the manner in which the defendant spent some money within the period before the deceased was rushed to the hospital.

Inspector Adaran said that the autopsy report conducted on the corpse of the deceased indicate that irregular bruises and abrasions found on the right side of the lower part of the deceased abdomen caused a trauma which was so intense and ruptured the uterus.

He stated that this caused the complications that led to the death of Adaeze Blessing.

The trial judge, Justice A. Adebusoye  adjourned the case till February 23, 2022 for defense to open its case as the prosecution ended.

Man docked for raping employer in the farm