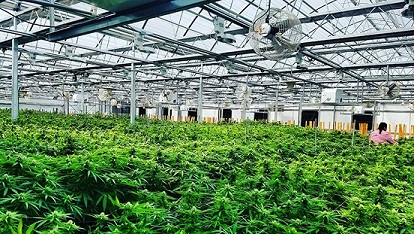 By Sunmola Olowookere
|
A college don has described the move to embrace medicinal cannabis cultivation by the Ondo state government as one that would benefit the country immensely.

Giving this hint was an academician and a pharmacist, Pharm. Olatunji Fasoro during an exclusive chat with The Hope.

It would be recalled that the Ondo state governor, Oluwarotimi Akeredolu recently made a working visit to Thailand in a bid to consolidate on his administration’s plan to commence cultivation of medicinal cannabis.

The pharmacist who is the Deputy Provost of College of Health Sciences and Technology, Ijero Ekiti, Ekiti state observed that the cultivation, distribution and sales of cannabis have been a subject of controversy globally.

He stated that while some countries gave it legal backing,some are sitting on the fence and others consider it as illegal.

He believed that the cultivation will give Nigeria economy a boost if properly managed.

He believed that the crop will acclimatize well with the soil in the state as there had been reported cases of illegal (large) production of it in States like Ekiti & Ondo.

He however warned that any land used for such purpose can scarcely be used immediately again and might need to wait for several years for other plants to be cultivated there because of the nutrients depleting nature of cannabis.

Also, he advised that there may be need for serious legislation in view of peculiarity of people

He believed that once it is backed up with appropriate legalislation to cultivate, distribute and embark on sales, exportation will not be a problem in case the country lacks facilities to transform it to finished product.

He stated that countries like Columbia, Mexico, India, South Africa, Afghanistan, Jamaica & Netherlands have legalised the cultivation of cannabis while countries like Canada & Uraguay have fully legalised its sales and consumption.

Also a clergyman, Pastor Dare Owolabi expressed reservations over criminally-minded youths that might see it as a means of unbridled indulgence of the substance abuse.

He claimed that the youths would be adversely affected as more of them would indulge in the substance abuse.