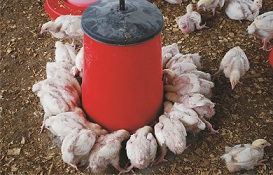 By Kehinde Oluwatayo
|
The Ondo State Government has concluded arrangement to train 150 youths on broiler production .

The Livestock Project Manager, Ondo State Agribusiness and Empowerment Centre, Mr Tunde Owa who made the disclosure during the screening excercise said the training will commence this week.

According to him, about forty profarmers are already on ground at the training centre in Isuada, adding that the target now is Epe and Ore.

While saying that the course any youth  read in the university does matter, Owa said criteria used in making selection was  passion for the work.

Apart from passion for the work, he said proximity to the training centre was also considered in choosing the youths.

“Although, we have hostel accommodation, our focus is that for example those who will be at  Epe preferably will be those who come from that area ditto Ore.

“Those we screened were those who have passion for the work, who are ready, innovative and can go to any length to ensure the work is done”.

Owa who said that the training is 85 percent practical and 15 percent theoretical, added that it will last for six weeks at the centre and that as the birds are coming, the training will be going on.

According to him, the youths are expected to go for another cycle of production conveniently without being monitored after the first six weeks training.

Owa said government’s intention is to ensure that buying of beef for ceremonies in the state is wiped off hence the need for alternative which is why it wants to make broiler meat readily available.

“The issue of people buying cow of those who are killing them is no longer there. They kill people, people still buy their cows to do the burial. We want to eliminate that idea. Broiler meat is better than cow meat even for ceremonies”.

According to him, 455 youths were screened out of which only 150 people will be selected for the work.

One of the youths who spoke with our reporter, Mrs Christanah Umukoro said she intends to continue with broiler production even after the training if she is considered for the training.

Umukoro who said government can not employ everybody advised the youths to find something doing rather than waiting for a white collar job.

She commended the state government for the initiative adding that it will improve the economy of the state.