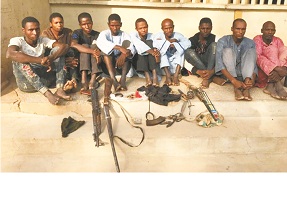 By Sunmola Olowookere
|
Two brothers of Fulani extraction have been arraigned before an Akure High Court presided over by Justice Samuel Bola, over armed robbery and kidnapping.

Hassan Mohammed and Umaru Mohammed were dragged to court on a five-count charge of conspiracy, armed robbery and kidnapping.

The prosecution said they allegedly attacked their victims’s car along Ayere/Akunu road in company of others who were currently at large , while armed with dangerous weapons around 12 midnight in July, 2018.

They were also alleged of dispossessing their victims, Musa Olusa and Abdulsalam Olusa, of their handsets, wallets and a sum of N18,000.

The victims were reportedly whisked away into the bush by their assailants who were armed with offensive weapons such as guns and cutlasses.

The two men were allegedly held hostage for five days until a ransom of N1million was paid, after which they were released to their family.

According to the prosecution led by O.C Ologun, the two accused persons were the only  persons apprehended among the kidnappers by the police through forensic investigation.

The accused persons entered a “not guilty” plea when the charges preferred against them were read to them.

The prosecuting counsel said that she intended calling three witnesses in the case and will tender only one exhibit.

The defence counsel, Mr. Peter Ogele,  urged the court to prevail on the prosecution to bring all its witnesses to court by the next adjournment date so that they could have a speedy trial.

The trial judge then adjourned the case till December 4, 2019.