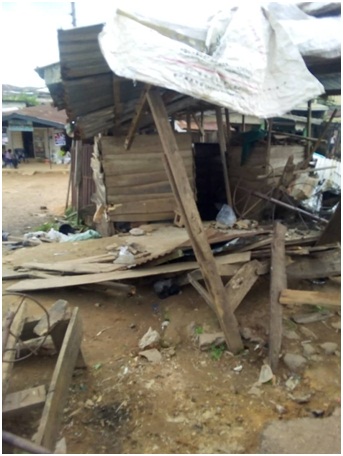 Tragedy struck in Ore, the headquarters of Odigbo  Local Government area of Ondo State, as a baby was killed when a car rammed into a shop.

The Hope Metro gathered that three persons were  also injured by the Toyota Camry  with number plate KSF77EZ.

The accident which happened along the ever busy Ore – Okitipupa road caused mourning for the parents of the baby and people around the area.

The  driver of the Toyota Camry was said to have swerved and rammed into the shop while trying to avoid hitting a motorcyclist.

An eyewitness who pleaded anonymity told our correspondent that the accident was caused by overspeeding.

“The driver drove on top speed, and rammed into a shop and killed a baby, leaving others injured.

According to another source, the deceased baby was sleeping in the shop before the unfortunate incident happened.

The Unit Commander of the Federal Road Safety Corps, Ore, Mr Sikiru Alonge, while confirming the incident with our correspondent via phone call said four persons were involved in the accident  in which three persons were injured while one person died on the spot.

He said the injured victims were taken to the General Hospital in Ore while the  corpse of the baby had  been deposited at the morgue.