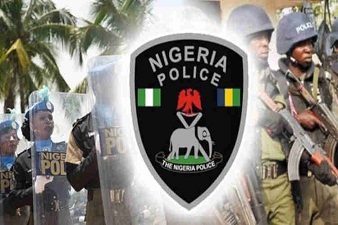 By Michael Ofulue
|
It was a session of gun duel  between  operatives of the Special Anti-Robbery Squad (SARS),  from  Igbotako divisional police headquarters and   a gang of armed robbers as they engaged  in a shoot-out that led to the arrest of one suspect,  Ibrahim Usman, during a robbery operation that occurred at Mile 49 Ore Lagos expressway in Odigbo Local Government area of the state.

The Hope Metro  gathered that the  gang of hoodlums dispossessed commuters plying Ore, Lagos road, of their valuables and attempted to kidnap them before nemesis caught up with them.

The Ondo State Police Commissioner, Mr Undie Adie  disclosed this to newsmen, while parading about 17 suspected criminals whose offences ranges from armed robbery, kidnaping, cultism, rape to other crimes.

According to the police boss,  on May 6, 2019, at about 7.50pm, policemen at Igbotako Division got an alert that some hoodlums were operating at Mile 49, Ore Lagos road and policemen quickly mobilized and raced to the scene while the robbers, on sighting them, opened fire on them and the police responded leading to the arrest of Ibrahim Usman.

Adie said the confessional statement of Usman led to the arrest of one Abdullahi who led other members of the robbery gang to rob innocent victims at gun point along  Lagos road, Ore.

Other arrested members of the gang, the police boss said, include  Umoru Mohammed and one Ibrahim both from kwara state.

He said that, items which include;  one locally made Single barrel gun,  three GSM phones, a cash sum of N7,200 were  recovered from them.

The police boss said the suspects are currently undergoing interrogation and would be charged to court soon after the police conclude their investigations.

In a related development, another gang of robbers who invaded Gruenberg Construction company Nigeria Limited at Omifon village via Ore and allegedly vandalised the company’s equipment having overpowered the night guard in the area have been  nabbed by the police.

The hoodlums whose names were given as Ibrahim Shaibu,  25, a native of Birni Kebbi in Kebbi state, Abubakar Ibrahim 24,   from  Omifon village and  Mohammed Bello, 25,  Ore area in  Ondo state, confessed to committing  the crime.

All of the suspects according to police boss, will soon appear in court.

He  therefore, enjoined members of the public to always give useful information that would help the police rid the society off crime and criminality in the state.