Home Column Save the food basket 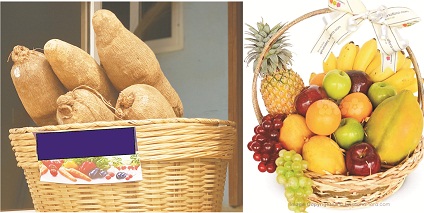 Save the food basket

By Bayo Fasunwon
|
There was a mild drama in one of the State owned universities. A lecturer, armed with a doctorate degree, collapsed. He was rushed to the university’s health center and was resuscitated. The medical doctor on examined him, and wrote a prescription. The colleagues of the resuscitated don felt an error had occurred in the diagnosis. The doctor prescribed a bowl of pounded yam with good soup and water to accompany the morsels on the journey to the stomach. The doctor insisted, and the hot-pounded yam appeared with assorted meat. The don ate to satisfaction, his dizziness disappeared, and back he was at his office, with renewed strength and vigour. That was the resurrection power of food.

The Yorubas have a saying that once hunger is eliminated from poverty, then poverty has been greatly reduced. Food is any material consumed by plants, animals, and man for the purpose of growth sustenance, repair, and energy provision. Food therefore provides living things with the essential ingredients for life and living.  Most people living in the rural areas seem to have a higher life expectancy rate than city dwellers. Apart from the reduction in accident rates, those in the rural areas have access to fresh and abundant food, which nourishes their body. I used to boast that I can go to my village a weeklong holiday, without money, and I will not go hungry. Such is the abundant life of the local Bushmen. Money may not be in abundance, but they sure have at their disposal what the city men, with all their wealth cannot acquire.

The governments of Nigeria and her peoples are also aware of the importance of food to the development of the nation. It was therefore cheering news that the federal government had executed some agriculture-oriented programs. The focus of government however seems to be skewed towards empowerment, small-scale enterprises development, and cattle farming. There is nothing wrong with this, but such would not develop the agricultural sector and encourage the continuous provision of food in the country. Subsistence agriculture would only ensure the provision of little food to the few Nigerians who have access to a portion of the earth to sow and reap what their mouths can feed on. A nation cannot be said to be agrarian without a conscious and planned programme for agricultural development. The food basket of nations is guaranteed when a nation has gone beyond providing adequately for her citizens to providing sustainable agricultural produce to other nations at a beneficial cost, without her nationals feeling any negative impact of food exportation.

In the time past, the government of Nigeria, and her component States boosted the production of agriculture by taking into cognizance the law of comparative advantage. Then, each of the regions was known for their specialization in certain agricultural produce. The various regions concentrated their energies on the production of both food and cash crops that their vegetation could adequately support for optimized production. Energies were not dissipated at the production of crops, which their lands could only produce at subsistence and low yield level. This specialization of produce not only encouraged plantations and large-scale farming, it also encouraged interstate trade and fostered integration amongst Nigerians. Each and everyone knew where to go to for the best of yams, pepper, groundnut, cattle, and other farm produces. However, the food baskets have been torn in the face of propaganda, hatred, insinuations, and intolerance. Now, each State and citizen is engaged in expenditures on researches, experiments and optimism to make their lands produce what they had hitherto depended on other regions to supply. While it is commendable that researches are being conducted, however the spirit behind such researches can be condemnable. These costly efforts at producing agricultural outputs that other regions could have produced at less costs also hastened the waste of funds, energy, and time at drilling for oil in the northern part of Nigeria, while leaving the oil refineries to rot away. Agriculture that had once been an integrating factor had since lost its centripetal force of national cohesion.

Hunger, poverty, and realities of life had literarily forced Nigerians’ remembrance that learning without hoe and cutlass is grossly inadequate. The vicissitude of life had forced many to remember that Agriculture employed more than 70% of the Nigerian populace before the discovery of crude oil.  However, the call from the Buhari led administration to all and sundry to embrace agriculture had become a call to death in some parts of the country. Many farmers had lost their lives and crops to gun wielding terrorists disguised as cattle breeders. The farmers in Benue have fled their farms, while bloodletting killers have sacked many village farm settlements under the guise of fending for their cattle. In the ensuing conquest of hapless farmers, many farm produce have been destroyed by cattle, leaving the farmers to mourn their human and material losses. Unfortunately, government’s response to these food terrorists have only left bitter tastes in the mouth of the people. Government has failed to realize that man shall not live by meat alone. The appropriation of land to cater for animals to the detriment of food cultivation and provision would only lead to famine and ultimate malnutrition of the entire populace. It is high time that government deals ruthlessly with all bandits who are preventing farmers from cultivating their lands for food production.

In order for the food basket of this nation to be revived and sustained, science, technology, and sense must be employed. In the first instance, mechanized farming should be vigorously pursued in the agricultural sector. This system of farming is only encouraged when agriculture is practiced on a large scale. Therefore, agricultural lands must be demarcated in each local government of the federation to support food production. These lands, which could be used for crop and livestock production, could be reserved based on the comparative advantage of such areas. This large expanse of land would be such that would support irrigation, fertilization, mechanization of farming activities. Within the context of marginal revenue, it would be observed that productivity in these demarcated areas would be much more than what scattered subsistence land holdings can generate in food production. The reason behind the increased output would be traceable to the fact that less human labour would be required to produce food for the nation. Mechanization would reduce the time spent on agricultural activities and enhance precision and optimal performance in the various farms. The application of technology however should not be restricted to planting alone, but should also extend to harvest and food production. For example, in the production of rice, palm oil, groundnut oil and others, technology would enhance better products for local and international consumption.

The inability of our scientists in producing storage facilities also endangers the food basket of this nation. Nigeria has grown to the extent that indigenous technology ought to have been developed to preserve our seasonal farm products, and keep them fresh all the year round. We are in the season of new yams and maize, and everyone relishes the consumption of these fresh foods. However, with time, their freshness would have disappeared from the market. This goes for other products such as tomatoes, pepper, vegetables, onions, and others. Preservation is a key factor in the sustenance of any nation’s food baskets. Lack of adequate storage facilities reduces the qualities of our produce in the international market and promotes food wastages in our dear country. If life travels in cycles, then it is imperative for Nigeria to develop food stores in this time of plenty, in order to save our food basket for the imminent food scarcity that looms.