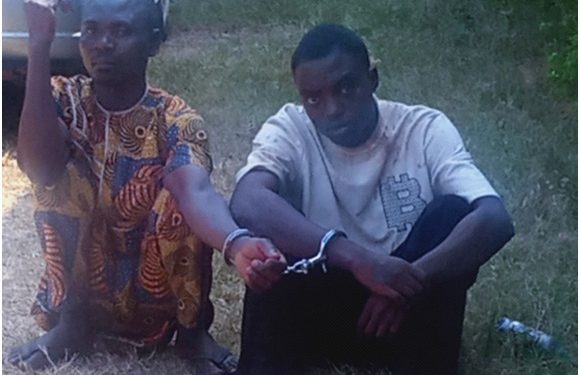 The Police have arrested a  serial thief identified as Segun Olubayo, who specialises in breaking into houses and shops, carting away goods in ile-Oluji, the headquarters of Ile-Oluji/Okeigbo Local Government area of Ondo State.

Olubayo was reportedly apprehended by the residents of the area and handed over to the police, following a complaint made to the police about serial burglaries in the town.

The suspect, while speaking with journalists confessed , “I committed the crime and I’ve been doing the job for four years now in different places. Sometimes in 2022, I  went to Ore to steal and I was shot in the leg by the police. But  I ran away with the wound because it was a gun wound. I did not take it to the hospital for treatment, to avoid being arrested.

“I normally take care of the wound myself at home. I operated on the leg till I was arrested by the people in the town and handed over to the police.

“I will sell out the items stolen at the operation to Mr Eze before 5 am the next day. I sell to him at a cheap price to sustain myself because  I’m an orphan,” he explained.

Also arrested alongside the suspect is the receiver, Uche Eze, that used to buy the items from the suspect.

Eze claimed that he was not aware that the suspect was a thief, saying the suspect told him his master sent him to sell drinks like lord gin, Jekomo herbal mixture, and sachet seaman to people because his brother is working in the company.

According to the police, the owners of shops and houses kept coming to the station to report a case of house and shop burglary. And  since then, the police have been parading the town.